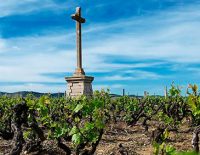 WE SUCCEED AT WHAT WE KNOW WELL AND LOVE

Founded in 1928 by Henri Claudius Trénel, Maison Trénel is one of the most ancient and well-known houses of the Beaujolais and the Macon wine regions of France. For nearly a century, the house has had the great fortune of working with vineyards are superbly situated and judiciously farmed. These vines consistently yield very high-quality fruit. For example, some of the vines for Trénel’s Beaujolais-Villages upwards of 60 years of age.

Maison Trénel is guided by the principles of authenticity of fruit, and authenticity of terroir. The house has always strived to produce wines & fruit liqueurs that exemplify the purest expression of their origins. This sentiment is born from a love of the land, as well as a deep respect and continued practice of Burgundian traditions. It also informs the house’s work ethic, written in Latin and evidenced on Maison Trénel’s emblem: Bene Facit Id Quod Bene Amat, or “…we can only succeed at that which we know well, and love.”

In 2015 Maison Trénel was bought by M. CHAPOUTIER to renew focus on highlighting the differences between different vineyard sites and terroirs, the wines from Maison Trénel continue to reach even greater heights.