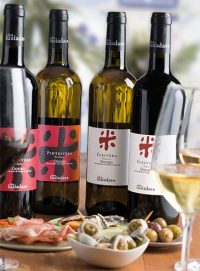 The inception for Dos Lusiadas began in 2009, when Michel Chapoutier and local growers decided to cultivate Touriga Nacional, Portugal's most admired indigenous variety. This collaboration resulted in the creation of Eleivera and Pinteivera, two classically styled wines made from Touriga Nacional.

This low-yielding vine produces small, thick-skinned berries with high fruit concentration. Touriga Nacional wines are often deeply colored, formidably structured, and exhibit a distinctive floral character on the nose. When expertly vinified, the wines can be cellared for medium to long-term ageing.

In 2001, the Douro Valley was awarded status as a UNESCO World Heritage Site. This notable accolade recognizes the long tradition of culture and winemaking that the region has preserved over the centuries and shared with the world.