Casalferro was first produced in 1993 when Francesco Ricasoli took the helm at the company inspiring him to begin his research into modern winemaking methods. Produced only during the best vintage years, Casalferro is a pure Merlot from the vineyard of the same name.

Intense ruby red in color with black walnut, vanilla, and spice on the nose. Elegant and velvety tannins ensure a long, persistent, and enveloping finish.

The growing season of 2014/2015 was quite regular without extreme events. Winter was mild with temperatures falling to freezing only at the end of December and for parts January and February. Although a little cold at the beginning, Spring also showed average temperatures followed by a warm May and June which favored a perfect flowering and veraison. Rainfall was not excessive at only about 6 inches. Summer began earlier, with high temperatures by the end of June recorded at peaks between 93°F and 95°F. July was also particularly warm with peaks at around 104°F. Rainfall was scarce at approximately 4 inches, but ample water supplies during the Winter and Spring months prevented drought stress. September and October showed perfect weather conditions with significant day-to-night temperature ranges favoring the accumulation of color and polyphenols in the grapes.

Aged 21 months in French oak barriques and tonneaux followed by 3 to 6 months in bottle.

Casalferro was first produced in 1993 upon Francesco Ricasoli’s arrival at the company, and since then inspired him to begin his research into modern methods. Produced only during the best years, Casalferro is a pure Merlot from the vineyard of the same name, a single plot of land, located at 400 m above sea level facing south-southeast. The soil is brown with a fine clay structure very chalky and little organic content.

Intense ruby red in color. The nose is powerful with balsamic eucalyptus tones and ripe red fruit aromas. The wine is elegant and sharp with soft tannins. Excellent persistence smell taste. A cru of merlot that reflects the terroir of Brolio.

The 2012 autumn and the 2012-2013 winters were among the rainiest of the last few years. The real spring began on April 10th when it stopped raining and there was a sudden change in temperature with extremely high average day temperatures. Summer had begun with wet soils but the high temperatures and the sunshine accounted for homogeneous bunches. The year was shaped in September: summerlike temperatures during the day falling at night (with a 15°C difference between night and day) that allowed a perfect technological and polyphenolic ripeness. To sum up, a quality harvest with healthy, perfectly ripe grapes. Merlot this year is fresh and of a deep ruby-violet color.

Aged 18 months in French oak barriques and tonneaux followed by 3 to 6 months in bottle.

Casalferro is the result of developments initiated in the 1990s, when Francesco Ricasoli took over the firm and inspired him to begin his research into modern methods. This wine justifies those who believe that the best expression of a terroir is when the typicality of a grape variety takes on completely new properties that are impossible to replicate in other places with the same characteristics. Today, Casalferro is a single varietal Merlot from a single plot of land which has reached the very pinnacle of grace and intensity.

This monovarietal merlot stands out for its balsamic, mineral and spicy notes that cover the black and red berries at the beginning, but then have to surrender to them as they appear and amplify in the glass during the tasting. Young and exuberant. Rich, vigorous and powerful. A delicious wine to drink straight away. A wine also able to defy time. It can be enjoyed for a long time.

Rainfall and temperatures over the winter were average. Spring was mild and rainy in the early part of the season, while there was no rainfall from late April through May. The rain between June and July helped to ensure a good water reserve and allowed the vines to develop even earlier than usual. A very hot, dry August, helped by cool September nights, completed the ripening of the grapes.

Aged 18-21 months in French oak barriques and tonneaux followed by 3 to 6 months in bottle. 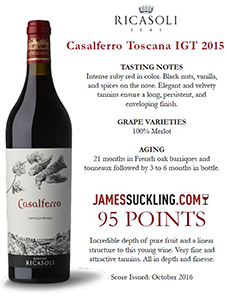 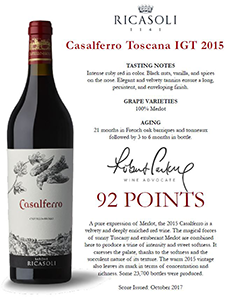 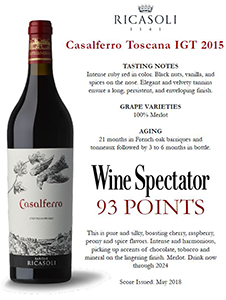