Dialogue with creativity: Dolce&Gabbana drew inspiration from the color of the magma to make the capsule and the grosgrain ribbon of the box, while the graphics of the label and packaging refer to the traditional motifs and styles of the Sicilian cart. However, Etna remains the true protagonist at the center of the composition, immersed in a suggestive, almost fairytale landscape, which evokes the chivalrous tales of the storytellers and the theatrical scenes of the Opera dei Pupi. Gold was used on the logo printed on the bottleneck’s collar and on the tissue paper that wraps the bottle, to celebrate the precious and sublime nature of Etna, as unique as Cuordilava. In addition to the 750 ml bottle, Cuordilava is also available in the Magnum format. Cuordilava born from the partnership between Dolce&Gabbana and Donnafugata, two Made in Italy excellences united by unconditional love for Sicily, passion for work and attention to details. A wine of elegant minerality and extraordinary volcanic personality, the result of mountain viticulture on the slopes of Etna.

Tasting notes: ruby red colored, Cuordilava presents a bouquet of small red fruits and orange zest accompanied by spicy notes (cinnamon) that intertwine with fresh balsamic and undergrowth hints. On the palate it is ample and deep, characterized by well-integrated tannins and elegant minerality; the long finish enhances its extraordinary personality.

Vintage and harvest: the 2018 vintage was cooler and rainier (946 mm) than the average* (801 mm) in this area; Rainfall was recorded in spring and summer, quite usual for vineyards over 700 m. a. s. l.; in particular, some rainfall between mid-August and early September exalted freshness and aroma. On this side of the volcano the following weeks were dry; this climatic factor, together with the choice to carry out some thinning, facilitated the desired ripening and the regular course of the harvest The harvest of Nerello Mascalese, with careful selection in the vineyard, took place during the first ten days of October.

Vinification and ageing: once the grapes arrive in the cellar they are sorted on a vibrating table followed by the selection of only perfectly intact and ripe grapes through a destemmer. Fermentation in steel with maceration on the skins for 10-12 days at a temperature of 25 °C. Aging for more than a year in French oak barrels and then for at least 30 months in the bottle before being released on the market. Grapes: Nerello Mascalese, the main red grape variety native of Etna. Longevity: over 10 years.

Production area: Eastern Sicily, north side of Etna, between Randazzo and Castiglione di Sicilia. Etna is a mountain viticulture with vineyards located between 700 and 750 m a.s.l.; the continental climate given by the altitude meets the Sicilian sunshine. In particular, this area north of the volcano is characterized by lower rainfall compared to the average of the other slopes of Etna. Summers are cool, with strong temperature variations between day and night. The soils are sandy, of volcanic origin, rich in minerals; the vines are trained to the traditional Etna alberello or to vertical shoot positioning system, on terraces contained by dry lava stone walls. 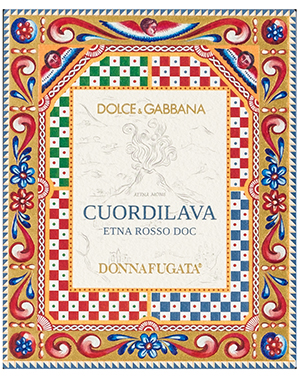 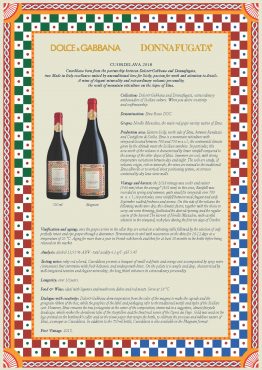