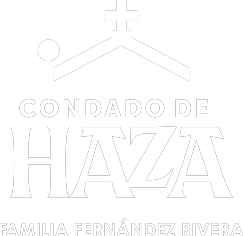 Made only in the very best vintages, the Alenza Gran Reserva is a tribute to Alejandro Fernández’s wife, and its name is a fusion of theirs: Alejandro and Esperanza.

The 2006 vintage is medium-bodied, well-balanced and smooth, with exemplary purity and poise. Dark cherry notes are accented by hints of vanilla, sweet spice, cigar box and dark chocolate.

Characterized as a challenging vintage due to its extended ripening season, 2006 in Ribera del Duero began with a winter that was more representative of central Europe than its typically dry homeland of Castilla y Leon. The beginning of the year was cold and rainy, giving way to a showery spring that lasted until the end of April, when a blast of heat hit Ribera del Duero. The rain resumed in June, after one of the driest Mays on record. Temperatures spikes in July were relieved by classic mid-summer Castillian storms and August was cooler than usual, with additional rainfall mid-month. While September began with ideal harvest conditions, early rain required careful vineyard management during harvest time. The resulting grapes were marked by good development in the face of adversity, and maintained key organoleptic components in their skins, making the wines perfect for long-bottle aging.

Lying in the coldest region of the four Fernández estates, Condado de Haza is the last winery of the Grupo Pesquera to begin harvest. Only the very best manually-harvested clusters are used for making the Alenza Gran Reserva, which are fermented whole-cluster in small, open-top stainless steel tanks. The grapes, juice and wine are moved 100% by gravity and the finished wine is aged for 30 months in fine grain, 225- and 300-liter neutral American oak barrels with a light-to-medium toast. Barrels are racked four times during the first twelve months and an additional 2-3 times per year during the second and third year of barrel aging. With the Fernández family dedicated to natural winemaking, all wines produced by Alejandro Fernández are neither filtered nor fined before bottling. Upon completion of barrel aging, the Alenza Gran Reserva is then aged for a minimum of 30 months in bottle before it is released to the market.

Planted in 1987, the 200 estate-owned acres of Tempranillo grown by Alejandro Fernández at Condado de Haza are located literally a stones-throw away from the Duero River. With a different soil type and higher elevation than its sister property in Pesquera de Duero, Condado de Haza is located in the province of Burgos, which is known for its rocky soils and cooler climate. Planted north-south in order to maximize sun exposure, production is limited to 3 kilos per vine. As respecting the Duero’s native biodiversity is of paramount importance to the Fernández family, chemicals are never used in the vineyards and all water is recycled using an on-site purifier. 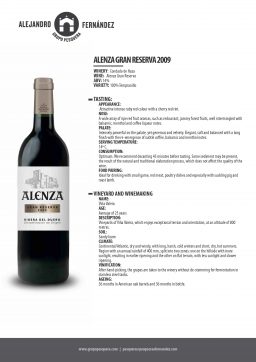 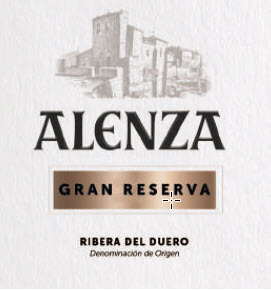