TYPIQUEMENT CHARLES AND STANDING TRUE TO THE HOUSE'S LONG TRADITIONS AROUND BLANC DE BLANCS WINES, the House has a long history of producing exceptional Blanc de Blancs. In the early 1980s, the Charles Heidsieck Cellar Master decided to reserve the very best Chardonnays for a cuvée named Blanc des Millénaires. Across thirty years, only six Blanc des Millénaires have ever been produced; 1983, 1985, 1990, 1995, 2004, and now, 2006. The House’s exacting requirements for quality and ageing potential show how exceptional the Chardonnays from these harvests were.

A deep golden hue with glints of light green, this cuvée offers floral notes of violets and acacia and lead into deeper notes of blood oranges, stonefruit, fig and date, complemented by subtle herbal notes of mild tobacco and eucalyptus.  The palate's remarkable texture is the special signature of Blanc des Millénaires. Beginning with a saline and chalky texture, the palate moves into creamy notes of nougat, citrus and whipped cream, with a round and generous finish, almost glowing with toasted accents. It is, in fact, similar to its 1995 ancestor: a magnificent reference!

Despite extreme weather conditions, the 2006 harvest was a generous one. The winter was cold with heavy snowfall, followed by several spring storms across May, then stifling heat at the beginning of summer. Record temperatures featured across July, with a cold and rainy August to follow. Finally, a spell of dry, sunny weather in September was particularly helpful for maturing the grapes and ensuring an unexpectedly smooth and generous harvest.

TYPIQUEMENT CHARLES AND STANDING TRUE TO THE HOUSE'S LONG TRADITIONS AROUND BLANC DE BLANCS WINES, the Chef de Caves singled out the greatest Chardonnays for this cuvée called Blanc des Millénaires. Only four previous vintages were created under this name: 1983, 1985, 1990, and 1995. The extreme exigency which the House demands is particularly clear with this cuvée. The fabulously fresh 2004 vintage offers the beautiful patina, long finish. and silky texture so characteristic of this cuvée and this wine is as legendary as the celebrated founder of the House, Mr. Heidsieck himself.

Shimmering and golden robe in hue with delicate effervescence, this cuvée offers elegant notes of lemon and apple blossoms with a hint of salty butter and almonds along with a toasted nuance of crème anglaise. At the onset, fresh citrus gives the wine a taut crispness which is followed by a gradual persistence and intensity. The mouthfeel is dynamic and perfectly structured with mineral tones and a long and well-rounded finish with rich texture.

IN 1993, CHARLES HEIDSIECK RELEASED ITS FIRST BLANC DES MILLÉNAIRES from its prestigious 1983 vintage for the first time. Since then, the House has only unveiled two vintages of this wine, in 1985 and 1995. This shows just how exceptional the Chardonnays from those harvests were! A vintage Blanc de Blancs that owes its name to the Chardonnay grapes, the exclusive variety from which it is produced, as well as to its long aging in the House’s chalk cellars. These unique and spectacular two thousand year old crayères that Charles acquired in 1867 are part of the historical sites of the UNESCO’s world heritage list.

Smooth and sensual, the wine reveals its generosity in notes of salty caramel and its mildness with notes of cream enhanced with hints of citrus, toasted almonds, spices (vanilla and ginger) and cedar wood. A fresh finish highlights the potential of this wine, produced with great Chardonnays.

A unique emotion, the impression of eternity just like how one feels when standing in the heart of the Gallo-Roman chalk cellars: such is the sensation experienced when tasting this legendary vintage. At the heart of one of the most beautiful and rare chalk cellars in Champagne, the wine has been kept under perfect aging conditions: a haven of quiet where the temperature remains at 50°F all year round and where the atmosphere is constant.

It has taken almost 20 years of maturing in these extraordinary chalk cellars to mellow the carbonation, to generate the fine, delicate bubbles so typical of the Blanc des Millénaires 1995 and take it towards its ultimate smoothness.

Almost a year of additional resting time after disgorging is still required by the Cellar Master to perfect the final balance and complete the masterpiece. The promise of an unforgettable moment...

Chardonnay is the only variety used in this exceptionally textured cuvée. From the range of choices offered by the Champagne region, five major crus from the Côte des Blancs have been meticulously selected, on the one hand for their ability to evolve and, on the other, for their ability to fully express their character during the maturation period: Oger for its unctuousness and structure, Mesnil-sur-Oger for balance, Avize for its minerality, Cramant for its complexity and Vertus for its freshness and floral notes. 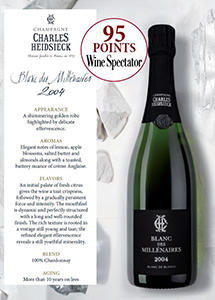 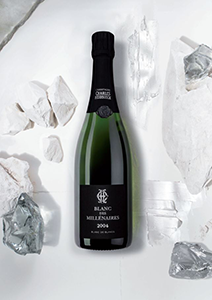