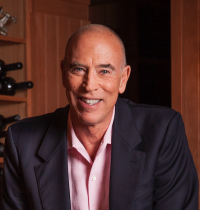 Michael Mondavi is known as the “quiet icon” among his friends and colleagues and is widely credited with helping to establish and build the Napa Valley wine industry as we know it.

Raised at the Charles Krug winery in St Helena, Michael’s career began in 1966 when he and his father Robert co-founded the Robert Mondavi Winery in Oakville, Napa Valley. He served in many positions at the winery, including winemaker for the first eight harvests, including the celebrated 1974. From 1969 to 1978, Michael served as Vice President of Sales. He was named Managing Director and CEO in 1990 and, following the company’s public offering in 1994, was appointed President and CEO. He later served as Chairman from 2001 to 2004.

In 1999, Michael, along with his wife Isabel and their two children, Rob, Jr. and Dina, purchased the Animo vineyard on Atlas Peak. This marked the first chapter of the Michael Mondavi Family Estate, creating a sustainable legacy to be passed down to the next generation.

In 2004 they launched Folio Fine Wine Partners – a full-service wine importer and marketing agency that was born of Michael’s strong belief and vision that the best wines in the world would be produced by wineries that are family owned and family managed. Today, Folio is focused on representing the finest portfolio from esteemed family-owned producers from Italy, Spain, Portugal, Argentina, France, Austria and Mondavi’s own family portfolio from California.

Recognized as one of the global emissaries of California wine, Michael has been actively involved for decades in industry affairs and numerous civic activities. He has held roles as Chairman and CEO of various industry bodies including the Wine Market Council, Napa Valley Vintners, California Wine Institute, and Winegrowers of California. In 2015, the Wine Enthusiast named Michael their 2015 Person of the Year, recognizing his contributions to the US wine industry.

Michael and his wife Isabel reside in Napa Valley, close to their children and respective families.