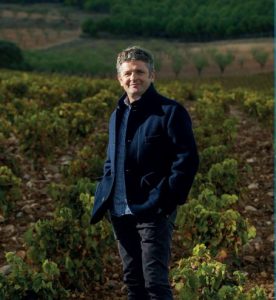 If anyone embodies the promise and spirit of “The New Spain,” it is winemaker Alvaro Palacios. Born into a wine family in Rioja, he now makes wine in three different appellations: Priorat, Bierzo, and his hometown of Alfaro in Rioja. Alvaro’s flagship Priorat wine, L’Ermita, is one of the most coveted wines in all of Spain. Following his great successes in Priorat and Bierzo during the 1990s, and the death of his father in 2000, Alvaro Palacios took the helm of Palacios Remondo, his family’s property and winery in Rioja Baja.

The Palacios Remondo Estate and vineyards are located at high elevations in the eastern part of the region: Rioja Oriental. Historically, Garnacha is the dominant red grape in Rioja Oriental, while Tempranillo and the white grape Viura play supporting roles. Alvaro’s passion for staying true to the tradition of the land inspires him to focus on Garnacha-driven wines that are expressive and authentic to the Eastern Rioja region. La Montesa, Propiedad, Plácet Valtomelloso and La Vendimia are among the very finest of Rioja Oriental, full-bodied wines with aromas of Mediterranean herbs, cherries and nectarines, and flavors of mixed berries and blood oranges on the palate.

Palacios is deeply committed to organic viticulture and natural winemaking practices, such as use of organic fertilizers in the stone-covered, clay soils. All of the wines are unfiltered and clarified only with egg whites. No exogenous yeasts or commercial compounds are added to the wines, and sulfites are kept to minimum levels.