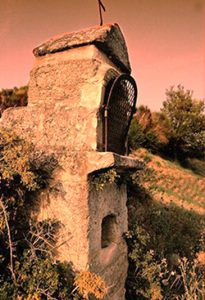 Located in the Châteauneuf-du-Pape region in the Rhône Valley, Clos de l’Oratoire des Papes is named in honor of the small 18th century oratory (oratoire in French) that overlooks its original 49.5-acre vineyard plot.  In 1880, Edouard Amouroux became the owner of this parcel, which was planted to Syrah, and contained the small oratory that had been dedicated to St. Mark.  By the 1920’s the Amouroux family was already bottling their own Châteauneuf-du-Pape wine from this vineyard parcel naming their vineyard Clos de l'Oratoire des Papes.  As a tribute to its rich history, the wine’s distinctive label design has remained unchanged since its original design in 1926.

The Estate has prided itself on respecting time-honored wine making traditions while at the same time, incorporating modern techniques to ensure the highest quality wine possible are made each year.   In 2006, Clos de l’Oratoire des Papes converted to organic farming and uses a horse-drawn plow to till the vineyard’s soils.  After the grapes are hand-harvested, they are transported to winery in small baskets only to undergo vigorous selection process with a double sorting table.    Depending on the vintage, the grapes are then partially (or wholly) destemmed and can be co-fermented with different varieties in order to produce a complex and pedigreed wine.